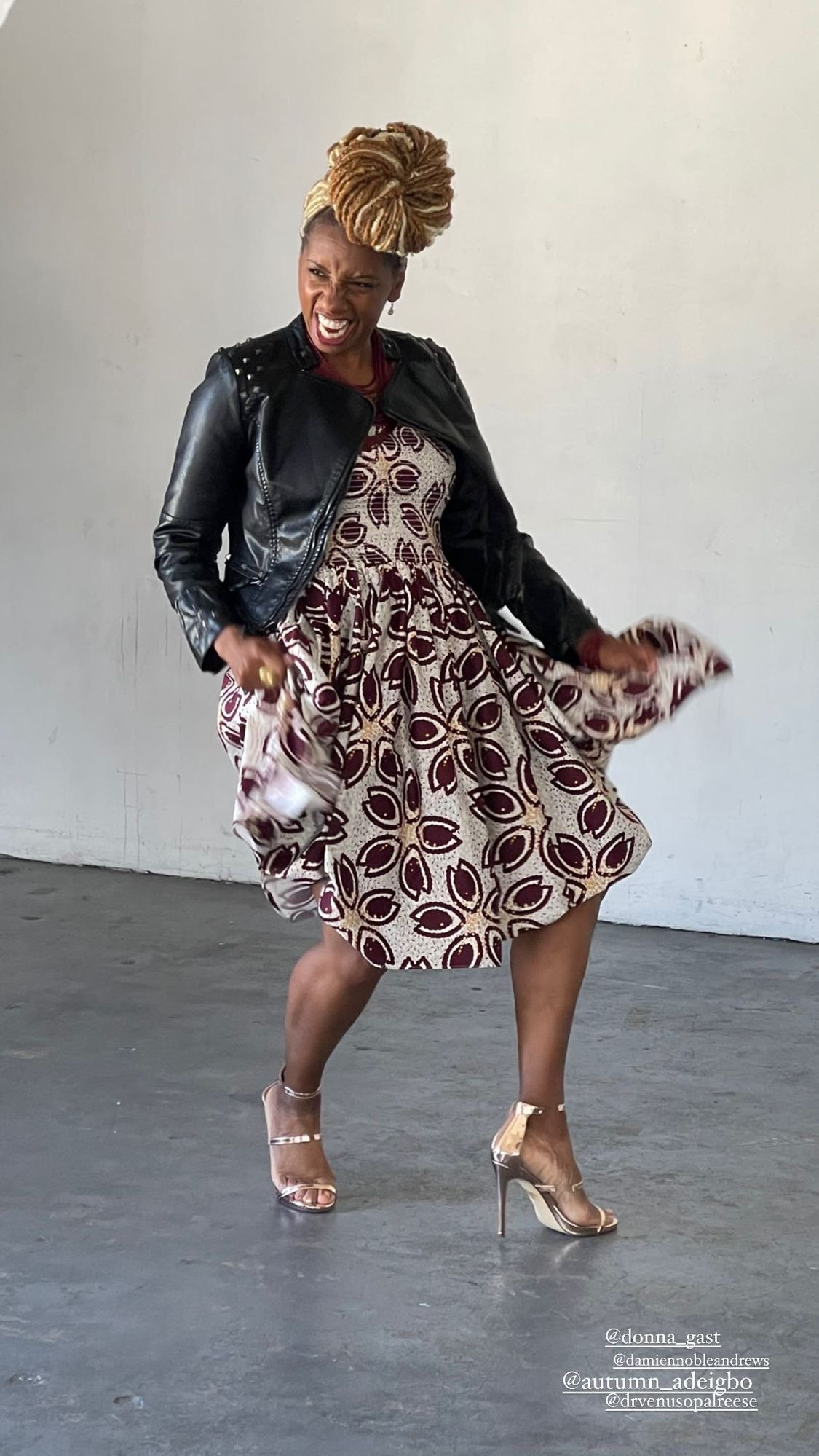 My photographer/Creative Director quit on me 2 business days before my tech startup photoshoot for & by Black Women.

He was a Black Man I considered a friend.
In his defense, it’s clear to me now he was in WAY over his head & he had weak boundaries. As a creative I have BIG ideas. As a businesswoman I am willing to pay to have those ideas become reality. So instead of him saying “no” he kept agreeing. Had he once said, “no, I can’t do that,” we could have talked it through.

Instead, he quit, turned me into the enemy, & withdrew his entire team.

In the past, his actions would have been cause for upset or panic. I didn’t do either.

I prayed for guidance & clear instruction on what to do. I had 10 of the 65 Black Women Content Creators flying in (ON THEIR OWN DIME!!!) to be a part of this historic event. I was unwilling to have them be effected by “ol’ boy” taking his marbles & running home. So I took it to God.

God told me 3 times to call my friend Damien Noble Andrews, the Photographer & Creative Director of the VenusOpal brand. Damien’s mom recently transitioned & his wife has been ill.

He has a young son.
He also lives out of state.
So I didn’t want to reach out to him, but there was a more honest reason for not wanting to hire Damien for this project.

I love being a Black Woman.
You know this.
The world knows this.

I have an intentional practice to hire & employ Black People. Keep in mind my teams are VERY diverse, but it matters to me that I walk my talk. I’m all about keeping Black money circulating in our communities as long as possible by purposely seeking out Black Business FIRST, in support of our economic emancipation.

So I hired a Black Man for this project & he quit at the last minute. I didn’t have the bandwidth to do anything BUT go into emergency mode.

Translation: I called my friends.

It was either cancel or let myself be supported by WHOMEVER God sent!🤣🤣🤣

Long story short, Damien, as an act of love, supported AND empowered my commitment to empower Black Women. He called in some of HIS FRIENDS, to help me have INCREDIBLE marketing collateral for this project.

Guess what? They were White.

I know you may be sick of hearing me say “Black” this or “White” that. I hear you. Trust me: I get sick of having to say it, but I want to make some very important points later so I need to disclose the race of the players now.

The day was magical. The looks & photos are exquisite. The content creator interviews, which will be the free content on the app to show off the technology before a viewer chooses to subscribe, are tremendous!!

However, here are the 3 expansions that turned this breakdown into a breakthrough that opened me to a new dimension.

1. Flexibility creates opportunity. Damien was the person who came up with the idea to feature the 10 Content Creators stories on the app. I would NEVER have thought of that. Had I dug my heels in to find another “Black Photographer”(which Damien tried to find last minute!!!) we would not have amazing content to launch right out the gate!!!

2. When someone or something leaves, let them. God has something SO much better. My stylist for this shoot connected me to a Black fashion designer who gave me 20% off of her dresses AND wants to collaborate with me for this & other projects. The team I had before could NEVER have made this collaboration possible. Everything about what got created in 2 business days FAR EXCEEDS what I thought I was going to get from the previous team.

3. Expand what an “ally” looks like. When George Floyd was publicly executed last year, it changed me. I turned all my platforms over to stopping the police from killing us. Right after Daunte Wright was mistakenly murdered by a police officer who thought she was using her taser instead of her gun, I did a video to my White Allies to do something.

After we had finished the shoot, Damien & I debriefed as we walked Happy. I said to him thank you, but it didn’t feel like enough.

So I tried again & said, “My words are too small to express the deeply level of gratitude for all you have done for me.

You have not just supported me – you have empowered 10 other Black Women to be heard in the world as well as every Black Woman who sees the marketing & subscribes to this app.

I thank you for being both my personal friend but also my ally in fostering a world were being Black is not a death sentence or a badge of disgrace & servitude.”

Then he said something that changed me at my core.

Damien said, “Thanks for seeing all of that. Very few people do. There are us, some of us White people, who really are trying.”

In my pain, I can see now that I hadn’t accounted for how support, in terms of social change, looks MANY different ways. Some White people DID March with us last summer, in the 60s, and during the Civil War. While other White & Jewish people let us stay in their homes as an essential part of the success of the Underground Railroad.

They write anonymous checks.
Or they amplify Black Voices.
Or they lobby Congress.
Or they make sure their children play with children of different races.

My point is this: my personal story of healing & success INCLUDES the love, support, encouragement, access, & visibility given to me by MANY White People.

That doesn’t mean I don’t love my race or my people. It doesn’t mean my people haven’t suffered greatly at the hand of white privilege, White power, & White Supremacy – & it doesn’t mean that White people are saints & will sacrifice their privilege on my behalf.

ALL of that hate happened & it still effects us to this day.

What I am saying as I heal history in my own heart, I choose to acknowledge this truth: I have known amazing love from White people my entire life. Be it through churches, school teachers, classmates, or business mentors & peers. I would not be who I am without the White people in my life who let me rage out loud & NEVER tried to correct me or silence me.

They just loved me.

I can’t call all of their names, but I say thank you. Thank you for leveraging your privilege in service of justice.

Thank you for loving on me in my rage & never invalidating it, even when I raged at you.

Thank you for supporting my commitment to empowering Black Women instead of making me feel like I was being racist.

Also, thank you for being silent Warriors in service of equality & justice for all.

Simply put – thank you for leveraging your White power as an act of love.

I see you.
I hear your support.
I feel your love.

Thank you for being my friend.