Loving A Black Man As A Queer Woman 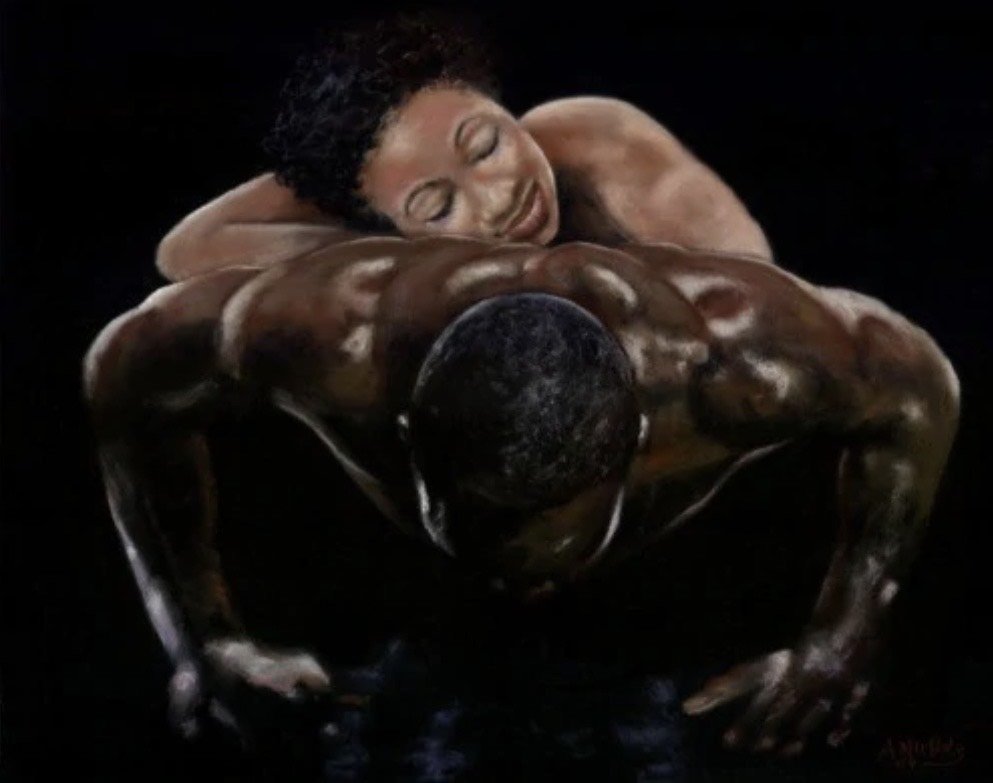 I am afraid.
I can feel quiet terror arising in my chest.
Anticipating being attacked.

I’ve heard the rumors.
Read the comments.
Deleted the vicious emails designed to tear me down.

◦ “Does he know you’re gay?”
◦ “Now you want a REAL man since your lesbian marriage failed.”
◦ You are an abomination to God. Sick. Pathetic.

The attacks hurt. They always have. Not like they used. I still feel the daggers.
Just not as deep.

Except when the attack comes from my Him.

Let me be clear: my Him is not being ugly, narcissistic, or abusive. In truth he is being everything I need when I need it, with the exception of when he gets triggered.

When my Him feels hurt by me, he reverts to his 15 year old self, when his mother died from cancer. He took to LA gang culture as a means of survival.  The gang became his family. Gang culture is rooted in retaliation and being right. When he hurts, he fights like a justified street-justice teenager who will get me back for hurting him.

When he retaliates in anger, I feel blindsided by the Black Man who says he loves me.

I feel emotionally unsafe.
I spiral.
My PTSD kicks in.

He gets himself sorted out.
Apologizes.
Puts in the correction.

The impact on me takes longer.

My nervous system takes days to regulate.
My heart hurts and my joints ache.
My trust diminishes.

To his credit, his retaliations have GREATLY decreased as well as the swiftness of him being accountable and putting in the correction is impressive.

So he is not the problem.

If life is a mirror of our internal thoughts, feelings, and behavioral patterns, then I picked a person who punishes me for being truthful. For being myself.

The person who punished me the most was Momma.

I have been attacked, sucker-punched, beat with a water hose, stomped, blamed, called a liar, choked, starved, whipped with extension cords, brooms, mops, pushed down steps, pushed through a wall, sat naked in bath tubs with scalding hot water—etc.

In order to survive Momma, I became a people-pleaser, an over-giver, and extremely accommodating to make her not hit me.

It worked. Until it didn’t.

Mamma was a sadist.
She liked making me wait.
To worry, wonder.

So I never told her or anybody about giving my first blow job at six or being molested at eight by a teenage girl.

I never told about the white men pedophiles who fondled me on the Greyhound bus or showed me naked bodies in the plush green areas of Ft. Worth.

I never told about the men in the neighborhood or the women on the streets or the white police officers who “helped me” —with strings.

I never told about being choked into submission, being forced to swallow, being pinned by my throat in a closet with my panties around my ankles by a “friend.”

The ONE time I did tell about one of Momma’s “friends” she attacked me, called me a liar, and beat me until I passed out.

I attract people who attack me.
For speaking my truth.
For bring my authentic self.

I am queer.
People say sexuality is a choice.
But what does it mean when the choice is taken from you at 6? And 8? By both genders?

I didn’t “choose” to be an unprotected child.

My body has been trained, manipulated, and hurt by people who said they loved me. If love, sex, and violence are what I have been raised on, how would I be able to choose anything else?

I have never been a lesbian AND I had the honor to be loved and nurtured for 10 years by my former wife. She helped me stop drinking, took care of me, and loved me.

I ended our relationship as an act of love.

I didn’t want my PTSD to damage her. If I had been well enough, we may have stayed married. I thank God for this season of my life and am not ashamed.

It was in her love that I healed my “mother wound” which allowed me to love and accept Black Women. That’s how I was able to create my Black Women Millionaire brand.

My father kept Momma from aborting me. But he didn’t stay. I felt confused. How could he love me enough to keep me alive but not enough to stay? I couldn’t make it make sense so I reduced him—and all men—to a “donor.”

He was good for something (I wasn’t aborted) but primarily he was transactional.
Take him or leave him.
Replaceable.

I took on healing my Father Wound in December 2017 when I prayed to God to remove everything in the way of my destiny.

I never thought it would be my marriage.
My womb,
My health.
My business.

It took all of that loss to get me close enough to God to confront the price of not having my father.

As I healed physically, I started therapy to heal mentally. In doing so I started to heal emotionally, specifically in terms of my father.

He did bad things.

He was a leader.
Charming.
Brilliant.
And he was MASTERFUL at flipping paper fifty ways.

As God and I went back and forth about why keep me alive, the more I could see that as long as I rejected my father in my heart, I would never receive or embrace the blessings from his lineage.

The blessings are passed down through the paternal lineage, biblically.

The truth is my father kept me alive BEFORE I was born.

That means he wanted me.
I was wanted.

All of my siblings and I have different daddies. I have my fathers genius with people and money. I also have his ruthless love for that which he calls his own. He threatened to kill Momma if she aborted me.

My love is just as fierce, just as raw as my father’s love.

It took a few years for me to shift my sense of self from my mother’s pain to my father’s protection.

The more I healed my relationship with my father in my heart, the more room I had for Black Men to show up in my life on my side. I realized that I had never given a Black Man the opportunity to love me for real.

Letting my wife love me was a choice I made, knowing I may be attacked. But love won. We didn’t have any significant bashing in the 10 years together loving each other openly in Dallas, Texas.

I had never tried with a Black Man.

I have had lovers of both genders my entire life. Sex is not personal to me. It can’t be when you live on the streets. But I had never known the love of a Black Man.

I started dating and exploring my sexuality. From swing clubs to dungeons I checked out what arouses me. I discovered Kink as well as Sub/Dom Culture.

I discovered there was nothing wrong with my sexual appetites and I needed to learn me NOW not what I was born into.

If I hadn’t been molested by both genders, or lived on the streets or grew up in violence on all levels, maybe I would have been straight.

I love, accept, and approve of me.
And so does God.

My Him’s retaliation button is being tended to by him and his therapist.

We are starting couple’s therapy just to focus on his retaliation trigger as well as to see if I can heal enough to not be so devastated by his wound of feeling hurt.

We may or may not make it.

I pray God can heal me of feeling attacked and attracting this sort of energy.

Or perhaps God let’s me be attacked so I can live free and unafraid in the public eye.

I do know that loving a Black Man as a Queer Woman is not about gender or sex.

It’s about healing so much that no matter what wounds we both have, love wins…

… be it for a season or a lifetime.

I am grateful I have known and am experiencing the imperfect and unconditional love of a Black Man.

As a queer Black Woman, I thank God that my Him loves me.