Black Soldiers & The 4th of July 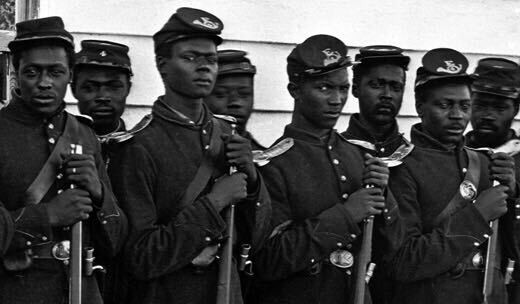 Today I give honor to our Black Men—enslaved and free—who fought or died for two causes: America’s independence and freedom from slavery. Black soldiers fought on BOTH sides of the battle. They chose based on which side promised personal freedom. And they fought with valor, selflessness, and dignity.

Because of the public execution of George Floyd and the protests since, I’ve been focusing on sharing historical truths to combat the lies used to discredit Black people. These lies, omissions, and defamations of character are positioned as justification for murdering Black Men and Women in vicious ways. It’s an old trick—paint us as less than human thereby tending our lives as disposable.

But we are not disposable. We are indispensable. We always have been. The Revolutionary War is a historical moment that without Us, there’s no guarantee we would be celebrating the 4th of July today.

I share below four incredible resources that will make you proud of Us. Knowing my people fought for both America’s independence and freedom from slavery transforms my relationship to the 4th of July. I’m former military as well.

Yes, White Supremacy used our bodies as human sacrifices to gain freedom from the British and reneged on its promise of full citizenship for all who volunteered to fight. This is not as surprising as it is hurtful. Betrayal by White People, the lack of integrity for comfort is with us to this day. What makes me proud is OUR integrity. The way we stand for what we believe. The way we fight—with honor and truth. Not with blatant lies and trickery. Unto death.

So as we gear up for November, I invite you to remember (and in some cases meet) our heroes from the Revolutionary War.
Don’t let ANYONE tell you other wise.

This land is OUR land.
We Built it.
We Fought for it.
We Died for it.

Our Black Forefathers fought for our freedom from the very beginning of this country.

Now it’s time for us to finish the job.

RESOURCES:
“What to the Slave Is the 4th of July?”: James Earl Jones Reads Frederick Douglass’s Historic Speech
Black Soldiers In The Revolutionary War
Blood & Citizenship: Black Soldiers And The 4th Of July
Black Heroes of The American Revolution (this is a fun and inspiring read)