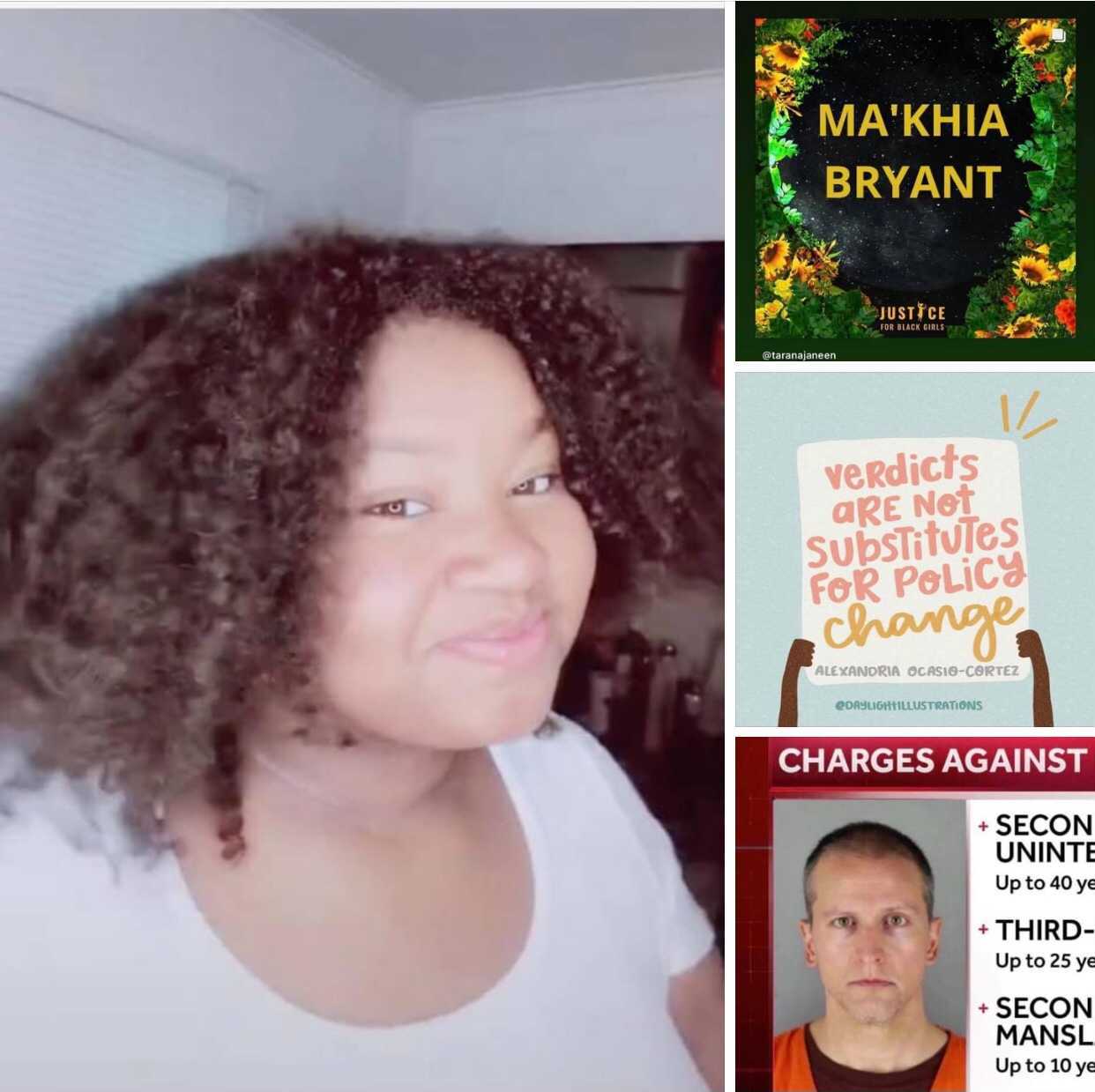 She had a knife.

That will be their justification for shooting 16 years young Ma’Khia Bryant 4 times in the back. She was shot by a police officer in Ohio within minutes of the Chauvin guilty verdict in Minnesota.

Ma’Khia was standing still when the cop shot her.

As a person who has suffered trauma, I can understand why she couldn’t drop the knife. Just being yelled at in a heightened situation can trigger freeze, flee or fight.

The police didn’t opt to try to deescalate the moment. He just shot her.

They will paint her as a villain; a violent out of control adult (not a child or teenager) savage that NEEDED to be shot to save other lives.

White people get killed by the police, but it NEVER makes the news. Why not?

Because the news sell more papers, ads, and downloads by turning our deaths into currency.

They sell ink with Black blood.

A White cop killing a white body doesn’t open the historical wound of outrage of black bodies being murdered by the police.

Question: How come we see SO LITTLE coverage for law reform?

The Democrats’ George Floyd Justice In Policing Act was passed for the second time in March but has been stalled in the Senate. Where is the front page news about the Act?

This Bill is something that would STOP police from killing BLACK PEOPLE!!!! Then why isn’t it in heavy rotation as Ma’Khia’s brightly colored tennis shoes, twitching after she was shot in the back four times?

Let me say this REAL LOUD for the people in the back, committed to hijackings my words:

— I’m VERY clear the Police kill white people — and according to some statistics, on average, more. While that’s accurate, it’s not true. Whites make up 64% of America; Blacks 14%. Cops kill more Whites because there are more Whites. But if we level the field, Blacks are killed 5 time times as often as Whites. And while it’s tragic (ANYONE is killed by the police is), that’s not my point.
— And I’m heartbroken by the many Black and Brown people who die at the end of a police officer’s gun. That’s not my point.
— I am also very relieved about Chauvin’s guilty verdict. That’s not my point.
— I’m clear Black people kill Black people. Again, not my point or what I am addressing.

What I am pointing to is the historical practice of displaying the Black Body in pain as entertainment.

From public lynchings to burnings to cutting off body parts after a tar and feathering of a Black Body, which White children took home as keepsakes, SHOWING the murders of Black people is designed to terrify us into abject hopelessness.

Simply put: the endless media cycle of police officers murdering Black people does two things: 1) reiterates White Power’s ability to take Black Life; and 2) keeps us in our feelings instead of focusing on something that WILL make a difference: like getting on the phones to the Senate to pass the George Floyd Justice In Policing Act.

When Chauvin’s guilty verdict was announced, I could not celebrate. Not because I didn’t want to. This is the first time in American history a police officer has been found guilty of murder of a Black person.

I couldn’t celebrate this historic victory. Here’s why. Chauvin’s sentencing won’t happen for 8-weeks, which is after the world has been pacified.

And because the Judge, who renders the sentence, stated that Maxine Waters’ comments could be grounds to appeal.

I’ve lived too much life to ignore the obvious.

So I’m going to continue to pray, and focus on getting the George Floyd Bill passed. If you were thankful for the guilty verdict I encourage you to turn your celebration into action by calling your state senator and encouraging him or her to pass this Bill.

I love you.
Dr. Venus